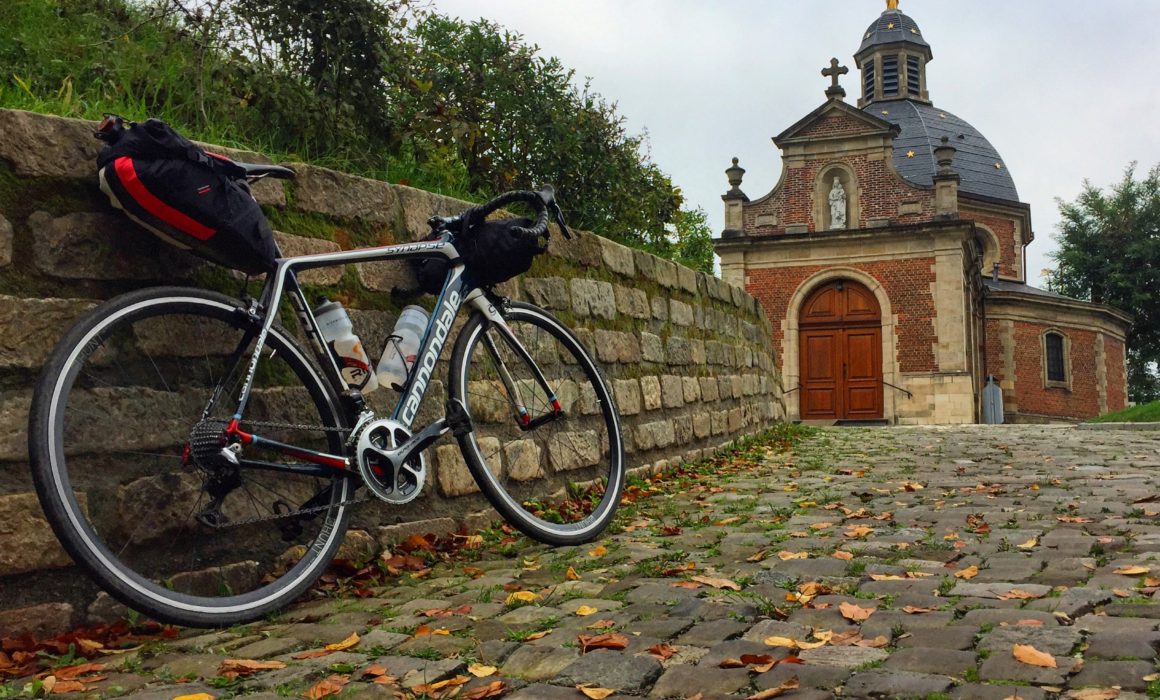 Seven weeks ago I moved to Paris. For the most part my riding has consisted of staring at a wall indoors. Partially due to the schizophrenic weather and lack of cycling pals, partially to my daytime job which entails working from home on weekends. I needed an adventure, a goal. I needed to be shaken and told, “You’re in France! Ride your bike!”

So I plotted a mid-week, 2 day escape on a clear October morning to Saint-Quentin, to find the storied pavé of Paris-Roubaix and the iconic cobbled bergs of Ronde van Vlaanderen. 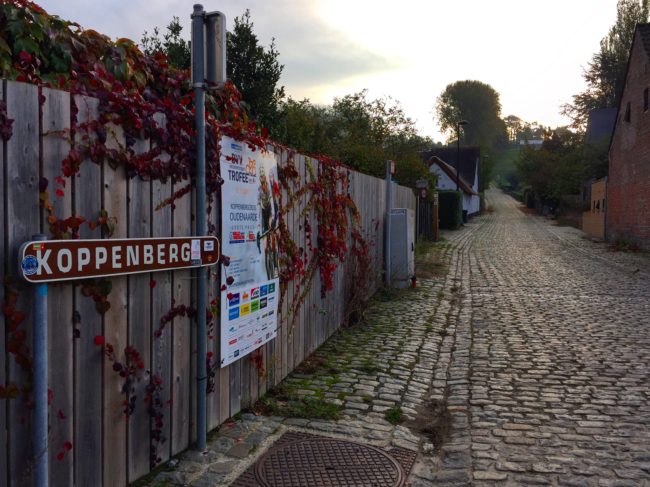 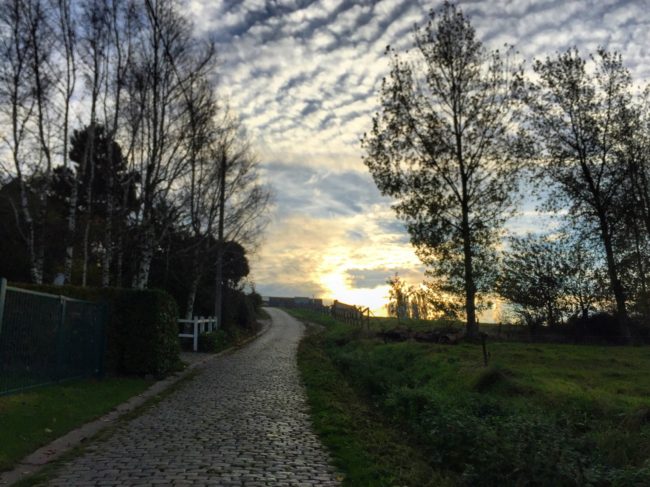 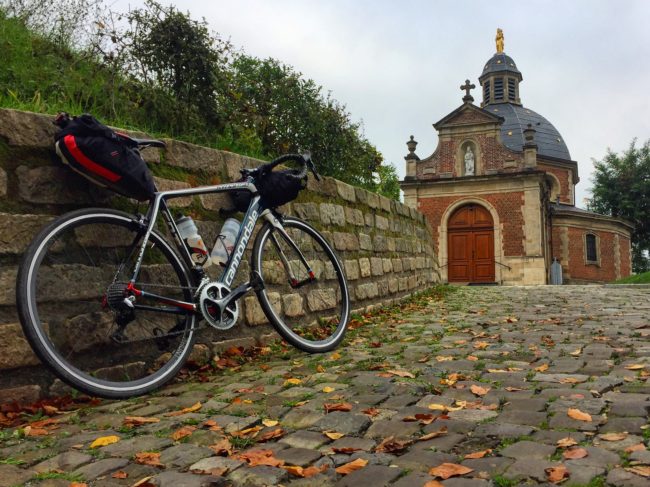 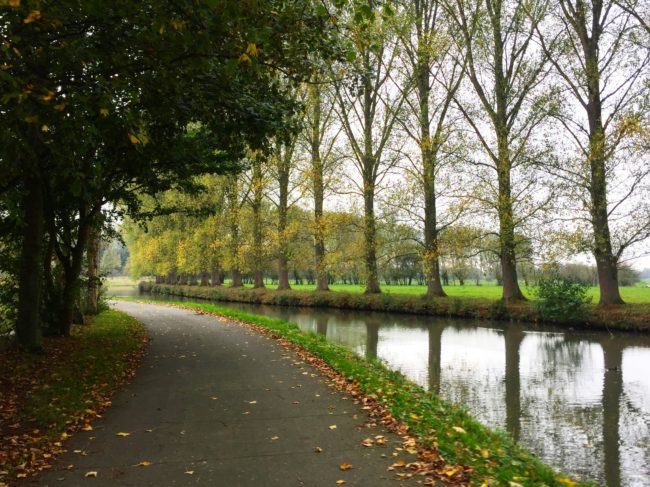 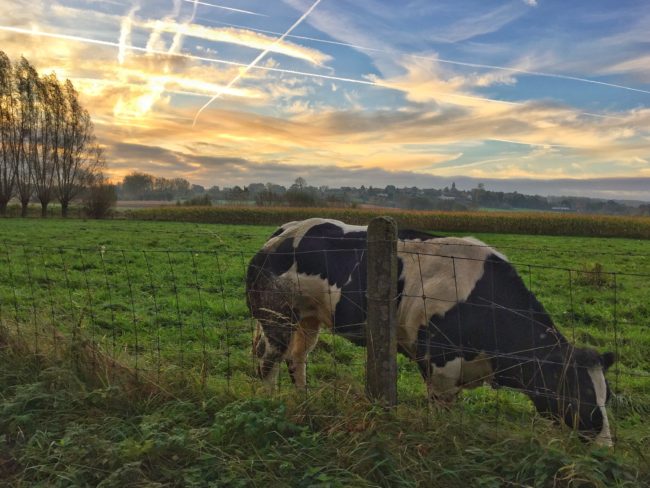 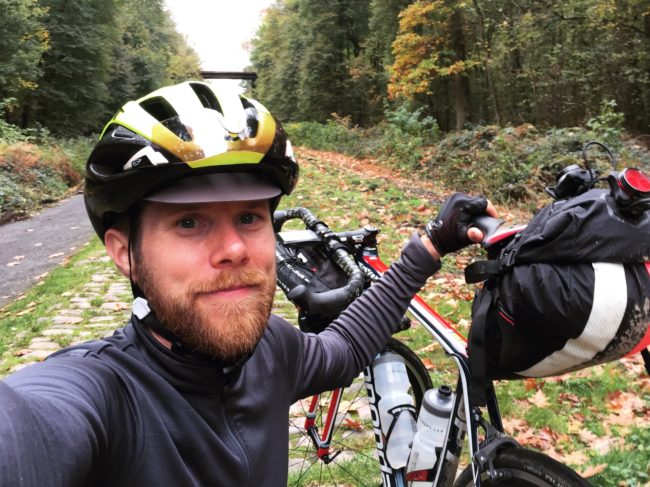 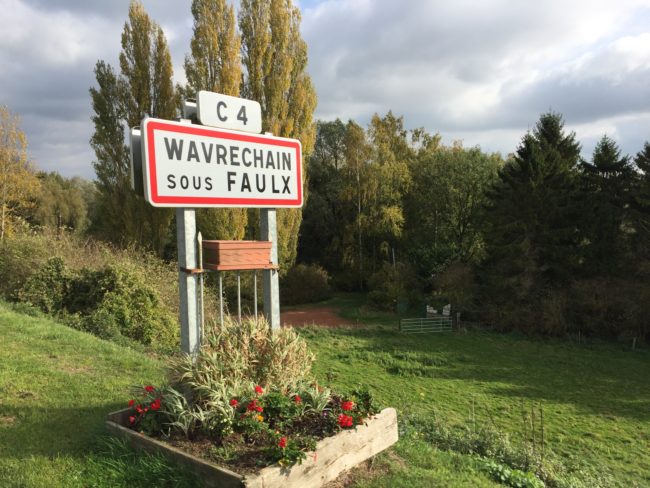 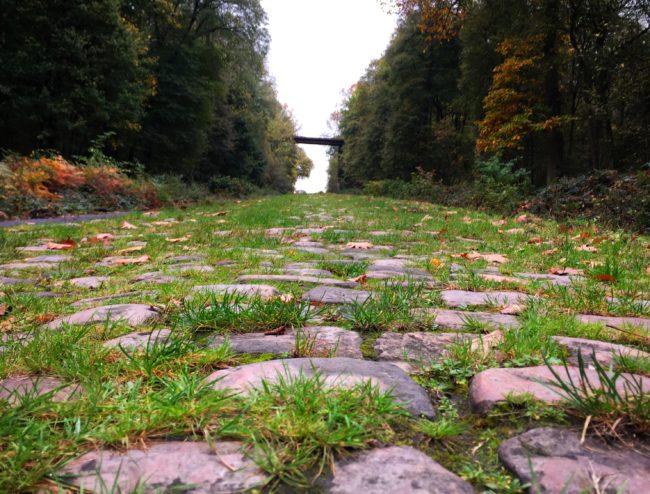 Day 1 would meander north and west for 170 kilometers until I reached a small village on the outskirts of Oudenaard, Belgium. Hopping off the early morning train from Paris, I immediately hit a scenic canal path that escorted me outside the city limits of Saint-Quentin. Just 6km in, I quickly had a problem. The familiar hiss of a puncture revealed a sizable gash from a sharp stone. Applying a boot, I furiously pumped the inner tube to account for the extra weight of my saddlebag.

With added caution for the next 80km, I found a bike shop, grabbed a spare tire and some lunch. Filling my stomach with the same fervor as the inner tube with burgers and frites, as I heard a little extra weight is a good thing for the Hell of the North. I was about to find out.

The first sector was dedicated to The Badger, Bernard Hinault. After winning the 1981 edition in the rainbow bands, he said after “Paris-Roubaix is bullshit”, but in French, which probably sounded slightly less crass. I couldn’t believe what was ahead of me. Having only seen footage and photos, nothing prepares you for the deformed nature of these “roads”. Though fortunate it wasn’t raining, large stagnate puddles still filled the gutter of the sector, while a mud caked surface adorned the crown in the road, inviting you to try your luck.

Having told myself I was a student of riding pavé, this first sector quickly taught me I knew nothing. Instantly, my calipers jammed with the clay like mud of the French Ardennes. This was a reoccurring theme on every sector after as my 28c tires, which made the experience slightly more comfortable, certainly added to the clearance issue once the mud became an unwelcome stowaway.

The absolute violence of the ride cannot be over exaggerated. I tackled 4 sectors in total, amounting to less than a quarter of what the pros traverse, and at a pedestrian pace. No part of your bike or body remains unaffected. Picking a line to ride is even more difficult. You might see a more reasonable patch in the gutter across the road, by the time you decide to change tack, the mirage is gone and a smoother line appears on the side you just abandoned. It’s a head game. I felt like Charlie Brown, and Lucy kept pulling the ball from under me.

Approaching the Forest of Arenberg, I was covered in goosebumps. The only feeling I can compare, is going to my first baseball game as a kid. The tiny players on a field the size of an ocean was too much to process.

Between these unforgiving stones, small flowers and sprigs of grass peaked through the gaps. I was sure this place was haunted, bolstered by the knowledge that a maze of abandoned mines criss-crossed the terrain underneath. It was quiet now, locals having a stroll and walking dogs. But come the second Sunday in April, the thunderous masses and ghosts will return, the flowers will hide, and the pavé will write one more chapter.

A gentle tailwind most of the day was immensely appreciated. After rolling into Belgium, I savored the day with a local beer and refueled (again) with a pile of frites and burgers. Tomorrow, Flanders awaits.

Day 2, clocking in under 140 kilometers, certainly was the highlight of the journey. The picturesque countryside of western Flanders is littered with cobbled bergs that decide the Tour of Flanders every spring. Setting off at daybreak, the Oude Kwaremont, Paterberg, Koppenberg and Taaienberg were all within reach. Each of them carry a gravity that is both reverential and real. Pitching you 17,18,20 percent at times, my pedestrian pace made it seem inconceivable to race such an incline. My only goal was to not dismount, both as a source of pride and function. I knew that resuming would be nearly impossible on such vicious ramps.

Everything was going as planned, as I grinded away on my 34/28, weaving up the Koppenberg. At the base of the climb was a flurry of activity. A small village was being built to accommodate the annual Koppenbergcross race the coming week. Then it happened, 50 meters from the summit, a forklift wielding a shipping container was descending the narrow corridor. There was no choice but to dismount and marvel at the skill of the driver as he surgically piloted the vessel backwards down a 15 percent cobbled grade. I took the opportunity to appreciate the sunrise over the autumn landscape. Farmland that rolled off into the distance and over the next tuft of Earth.

Nearing the village of Geraardsbergen, the Muur awaited me. A climb that is etched into the Monuments as it stands as one itself. Attacking on this climb is often more memorable than the winner of the race. A gentle prelude of brick roads creates a sense of ease. A few left and rights through the heart of town reveal a wooded entrance to the unknown. Once on the secluded slopes, the bricks morph into unforgiving pavé. The bike rattles and chatters in ancient tongues while your legs are baptized in their own searing acid. The struggle of keeping your front wheel down on the 19 percent grade is real, as I feared the dream of my first wheelie would be my last.

Then as quickly as it began, the gradient eased as I swung to the right and there is was, the chapel on the Muur. A cathedral of cycling, and a jewel of Flanders. My first impression, was how small the whole setting was. The wide angle lenses, and dense crowds you see in photographs and TV make this area seem larger than life. Alone on a mid October afternoon, overcast clouds settling in for the season, it felt subdued, the way it must be for the other 364 days a year.

I worked my way south and west, back to the border of France. I found a riverside bike path for 40km, cutting my way through the northern Ardennes. Crossing back into France, the cycling infrastructure was noticeably different. Though not poor by any means, the Belgian roadways are impressive by any comparison. In France, drivers are respectful, but you do feel the need to watch yourself just that little bit more.

I felt good the whole day fueled by a mountain of frites the night before, I skipped lunch and reached Maubeuge ahead of schedule. Not in time to avoid the dreaded French blackout. Anyone who has ridden in France knows that looking for food after 3pm is a fool-hearty mission. I broke this cardinal rule and was left with only one option, you guessed it.

Regardless, train ticket in hand, I tucked into yet another head sized burger and replayed the last two days in my head. Moving to this part of the world and having access to these roads has given me a new appreciation for the bike. It’s easy to get stuck in the day to day routine of life, but sometimes you just need to be shaken up a little, or in this case, a lot.